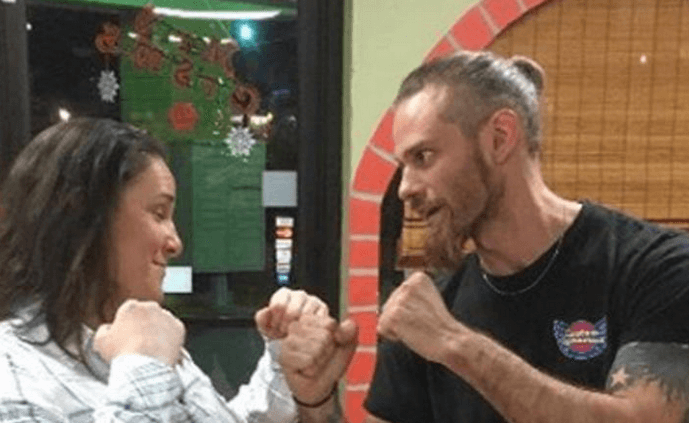 Kristopher Zylinski posted how women wouldn’t stand a chance against a man in an MMA fight.

Kristopher Zylinski wrote:“99% of women are too weak and lack the reflexes ro do enough damage to stop 99% of men. Even if they knew BJJ they just don’t have the size or strength to use the holds. It’s dangerous to teach any woman to try and strike or fight a man. Just my 2 cents.” “by a man, yes. And I said 99% of women will lose to 99% of men. Me vs Female MMA pro fighter? Still 80/20 me.”

With many twists and turns, and after two female fighters canceled due to eye injury, Tara La Rosa jumped in to fight Kristopher. Tara LaRosa is a PRO Female MMA fighter with a score 22-5 and a Purple belt in Brazilian jiu-jitsu and a Brown belt in judo. After steeping in Tara wrote on her Facebook profile:

“A friend tagged me in on the search for a replacement and I responded as a joke… well, I guess shit got real, so here I am! I feel like I should say something like “hey, hold my beer for a second” or “Hey Y’all, watch this” in my best redneck accent. It fits. I’m a part redneck. So, I guess… here we go!”

“If you don’t know me, I’ve been training in martial arts since 1995. I got into Shotokan karate in hs and then got involved with Judo in college. I placed 2nd at collegiate nationals in 2001. Shortly after, I started training in Brazilian Jiu-Jitsu and MMA (which was referred to as NHB back then).
I had one amateur fight and my mom got scared, and said you’re moving with you’re auntie and uncle in Bel-Aire… wait no, that was Fresh Prince.”

“So I had an army fight Nov 2001, then went pro in April 2002. I’ve been training and fighting ever since.
If you want more, check the wiki. Also, I’m on twitch almost every weekday from 2:30-5: 30 pm, so come in and ask me anything! Follow me on Twitter for better interaction, I’m not very good at FB lol
Welp, that’s me! …so, here goes nothin’!”

The event was scheduled f but it was canceled just an hour before the bout beginning. According to McDojlife,  the State Athletic Commission showed up to the event with the police and shut down the fight.

The fight finally happened and you can watch it in the video below: