The fight between Roberto Atalla and Jean Jacques Machado continues. everything started after Machado talked about the case of students promoting their black belt professor to the rank of the coral belt.

“This week I came across 2 posts from a famous coral belt and his student who wears a sixth degree, both complaining about a guy who undeservingly got a coral belt. Funny thing is that neither have followed the IBJJF standards, so what moral ground do they have to shame others when they clearly have disrespected the only valid criteria in our sport? Hypocrisy grows rampant in our sport.”

Machado responded on his FB page:

“My name is Jean Jacques Machado. I recently turned 50 years old. I was privileged to be born into a martial arts dynasty. From the moment I was able to walk my training in the art that would become my life’s work began. I did not realize it at the time, but it was very clear my journey was going to be different than the average student of the Martial Arts.

Jiu-Jitsu surrounded my life growing up. Training with my brothers and cousins, learning from individuals who went on to become Jiu-Jitsu legends and the almost daily ritual of listening to the stories and wisdom that my uncles, the great Carlos Gracie Sr. and Helio Gracie would instill in me, I never found myself lacking motivation or inspiration to face the challenges life would put in front of me.

I went on to create my own legacy in the art. I eventually became an instructor, achieving numerous achievements in the arena of competition, and in time became the head of my own organization. Jiu-Jitsu has given me so much, but one of the greatest lessons I ever learned was that I need to always give back to Jiu-Jitsu as well.

Through the work of myself and my family, literally millions of people around the world now have the opportunity to learn, compete and make a living teaching this amazing art. I have contributed and donated much of my time to give back, often without financial reward or public acknowledgement of any kind. However, on my 50th birthday I was awarded a certificate of recognition from the Mayor of Los Angeles recognizing my efforts in contributing to the economic growth of the city in which I call home. Much like my Coral Belt, which has been the subject of debate, these are accolades I do not aspire for, they are merely a consequence of my work.

It is important to point out that at the time I was awarded my Coral Belt, the timeline to achieve that rank was 25 years at the Black Belt level. I would like to not believe it was because of my promotion, but I did find it ironic that an evaluation was made shortly after and the timeline changed to 30 years. In addition, my years spent as a Black Belt were far, far different than the average Black Belt. Nevertheless, to this day I still consider it one of the highest honors of my life when the man I refer to as Master, the great legend Rickson Gracie, tied it around my waist.

It is easy to speak negative or critical of others when you are not in the spotlight. Those who have achieved nothing, or contributed nothing are incapable of understanding the work and sacrifice of those who laid the foundation through their blood, sweat and tears. It is because of our work that you get to enjoy training or making a living in the art that we helped give to you.

To my peers, students, friends and fans throughout the world I will always be Jean Jacques Machado to you.

Later Machado wrote: “No more talk. Your 15 minutes of fame is over. If you have a problem with my Coral Belt, come and get it.”

No more talk. Your 15 minutes of fame is over.If you have a problem with my Coral Belt, come and get it.

Atalla wrote in the comments section:

“I never wanted your f**king fake belt, you can stick up your butt, or try to sell it, whatever fancies your imagination, corrupt snake oil salesman. You dont want more words, come shut my mouth then! Go learn maths, and respect the sport that pays your bills and wait for due time, CHEATER!” 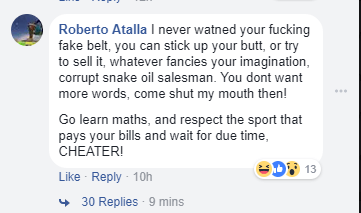