When we talk about BJJ, most of you have an immediate reaction to think about the grappling on the ground. And to be fair, the on-ground grappling is a big portion of what BJJ is all about. But if there is one mistake that the novice BJJ practitioners make it’s forgetting about the importance of the stand-up game. Every match starts out with the opponents standing and trying to score a takedown – there is an option, of course, to start from the ground if this is your preference. But in any case, you’ll want to know more about the best BJJ takedowns that every BJJ fighter should know about.

The Most Effective BJJ Takedowns

Takedowns that are considered to be the most effective for BJJ are:

The most basic and most highly effective among BJJ takedowns is the well-known double-leg takedown. It’s pretty straightforward to complete this move – you do a level change and you grab your opponent’s legs behind his thighs. You then continue to push and trip him up with one of your legs, or you lift him up from the ground and rotate him so that he will fall perpendicular to you and you will end up in side control. The second option is particularly brutal and it can result in injuries if you’re not careful.

There is a powerful way to defend the double-leg takedown and it’s with a sprawl. So, you will want to be quicker than your opponent if you wish to complete the double leg takedown – make sure that you distract his attention somehow and make sure that he doesn’t expect a double leg takedown. The stakes are a lot higher if you’re in an MMA fight or even a real fight – your opponent may all of the sudden decide to counterattack with a jumping knee which can land on your face as you’re changing levels. If you wish to see a particularly brutal example of this, then you should see the fight of Michael Venom Page vs. Cyborg in Bellator MMA. 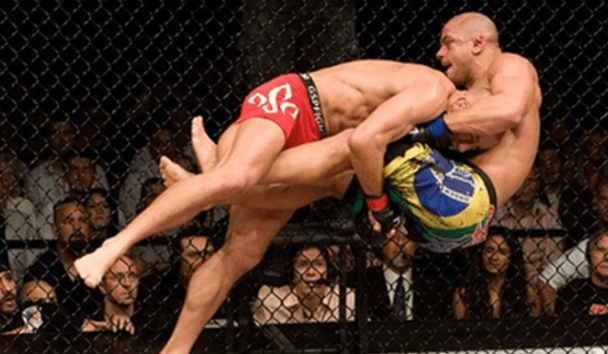 The second most popular amongst BJJ takedowns and most used BJJ takedown is the single-leg takedown. For this to work, you only need to grab one of your opponent’s legs. This move is a bit trickier to implement than the double-leg counterpart, but if you know how to do it then it’s pretty effective. You need to lift your opponent’s leg and place one arm under his thigh and the other arm under his ankle of the same leg. Then you will need to use your shoulder to push and rotate your opponent diagonally into the direction that’s unsupported by his leg. This will result in your opponent losing balance and falling down.

There are some variations that you can make on this move, especially if your opponent is a hard rock and is trying to block this move. You can lift his leg high in the air and then sweep his other leg with one of your own legs. You can also perform the low single-leg takedown where you dive deep for your opponent’s leg and then use your head to push his knee to the side while you have his ankle in your hand.

You can also use this throw defensively if your opponent shoots for a single-leg takedown. While he’s trying to grab your leg, you can turn around and use that leg to launch him into the air and take him down.

Next in line is the Body lock takedown. If you manage to get two underhooks on your opponent in the standing position, then you have a great degree of control. You can clasp your hands behind his back and use this control to push into him while you set up a trip behind his leg. You can also get to his side while you’re holding him in this way and then you can practically drag him to the ground. Another option would be you to clasp your hands at your opponent’s lower back and then squeeze hard as you’re leaning into your opponent with your upper body. If done right your opponent won’t be able to resist the pressure and he will crumble down to the ground.

The Ouchi Gari, or the inside trip, is also a great takedown that you can learn for BJJ. This trip also originates from Judo. While you’re standing opposite your opponent and you’re battling for grips, you may all of the sudden insert your right leg on the inside of your opponent’s left leg (or vice versa) and then use your leg to trip up your opponent. You can then choose whether you will fall down with your opponent or if you will continue to stand after the trip is complete.

The foot sweep is another takedown that you can use if you see that your opponent’s attention is not focused on your legs while you’re battling for grips. You can move to his side while holding his gi and use your leg to literally sweep both of his legs. You could go for both of his legs from the outside, or you could go for one of his legs from the inside. The choice is yours and it depends on the type of opening that you will get.

Finally, there’s the ankle pick. If you see that your opponent is bent heavily, then you can use this to your advantage. You can immediately grab his ankle and pull it up in the air. Your opponent won’t have any choice but to lose balance and fall to the ground. You can go for either of his ankles – and the great thing about this move is that it can be used in a combination with the Uchi Mata. If you fail your Uchi Mata then you can easily transfer to the ankle pick and finish the takedown in this way. You can see a supreme demonstration of the ankle pick in an MMA bout with UFC start Yoel Romero

BJJ Takedowns are must know to be well rounded BJJ Competitor

With recent trends and popularity of guard pulls, BJJ takedowns stopped being part of a program in many academies. Today many BJJ practitioners don’t even know how to do basic takedowns which can be a problem in real life situations.

Be sure to find out which of BJJ takedowns suit you best and make sure to drill them for a very long time with opponents of all shapes and sizes. If you can do this, then you will definitely improve your stand-up game in BJJ by leaps and bounds.