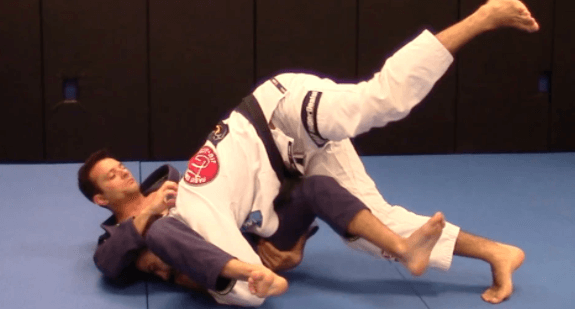 It can be said that the techniques in BJJ are universal. However, a lot also depends on the type of body you have. Some things will work better when you are small and others are more effective when you are bigger. It is no different when it comes to the guard passing. For smaller people, it will be probably easier to pass the guard by clever use of inversions, while in a standing position, etc. While for bigger ones usually, it will be more effective to use smash passing, pressure, and slow methodical grinding to keep the opponent pinned while working around their legs.

Of course, each of us has our preferences and favorite techniques. Even if something is recommended to you, due to the length of the limbs, etc. you might not like it. What works for you might also not work for someone else, even if you are the same size. And that’s all ok. However, that does not mean you shouldn’t be open to new ideas. Even if you don’t want to be somehow “limited” by your body and think that all techniques are for everyone, it is sometimes good to look specifically at the techniques recommended for your body type. Also, it is worthy to see what grapplers who are physically similar to you are doing. Such things can often be very inspiring and even change your BJJ game dramatically. Of course for the better. Therefore see below for the best guard passing options and tips for your body type.

BJJ guard passes when you are bigger

If you consider yourself a bigger person, taller, stronger, etc., you’ve come to the right place. Below you will find a few techniques tailored to people just like you.

The smash pass or pressure passing is point-blank made for larger people. And it also just so happens to be a great method for beating the butterfly guard. So, if you are interested in a butterfly guard pass, there are some important things to keep in mind. Firstly, when passing the butterfly guard, remember to enter in with aggression. You need to flatten your opponent to stop any of their bodyweight or forward momentum. This will prevent them from lifting you and sweeping you with their butterfly hooks.

To perform a butterfly guard pass you should work towards freeing one leg from your opponent’s hook. The best method of doing it is stepping back and retracting the opponent’s thigh out of the way. Then move as soon as you are free from the hook because it is a bad idea to hang out in this position for too long. So instead place your thigh against the hook. This allows you to double up against your opponent’s leg. And having a two on one position like this makes you much more powerful. Thanks to that you can bring the outside leg over the thigh. When the opponent does nothing or offers no resistance with the shin, you can simply pass and establish side control.

Actually, there are several variations to this guard pass. However, the main points of the technique remain the same. You need to flatten your opponent, free yourself from the hook, go on one side and move the hips. Also, check all you need to know about the butterfly guard passing below.

If you are bigger it is good to use your size in general and the size of your limbs in particular. Thanks to this, you have unimaginable power that is worth using, for example when playing closed guard from the top. In this position, you can control your opponent’s arms by pushing them into the mats at the biceps. This type of control allows you to scoot the knee underneath your opponent’s butt and then readjust his base. As a next move, step up with the outside leg of your opponent and then stand fully into a tripod base. Your leg should still be a wedge in your opponent’s guard. Then step back with his outside foot. Your inside knee should be now slicing down the middle of your opponent’s guard to pry it open. As you sit, your back forces the guard open. And your knee is now completely in between the opponent’s legs and you are set up for an easy pass. Check out below how BJJ black belt and a former MMA fighter Fabiano Scherner does this.

If you’re a little bigger it’s good to look at someone a little bigger too. And in this case, the bigger guy will be the absolute champion, Gordon Ryan. When he started competing he just dominated tournaments like EBI and the ADCC with his unreal guard passing system. Therefore it is not only worth it, but it is almost necessary to follow an example from him.

Going to the point, typically when playing bottom half guard, your opponent is going to have an under hook secured on one side. Looking at Gordon you can see that the first thing he does is initially set an under hook of his own. He pulls his opponent’s body in towards him and secures the grip. For a grip, he suggests that the wrist grip is the tightest. Then Ryan pushes in towards the opponent, bringing his head over his opponent’s far shoulder.

Remember, you always want to pass on the opposite side of the under hook. Ryan does this by bringing his head to the floor to establish his base. Thanks to that he secures butterfly hooks in between his opponent’s base, while at the same time controlling the knees. As a next step, Gordon escapes his right leg. At the same time, he pummels his left leg over, sliding the knees behind his opponent’s hips. He also brings his head back to the opposite shoulder. This body lock fully controls his opponent’s hips. Thanks to which he can finish in top side control. Check it out in action below.

Guard passing when you are smaller

When it comes to guard passing when you are smaller there is no one else better to look at than the living legend Marcelo Garcia. His top game and guard passing are just amazing. And you can learn a lot by looking at his fighting style.

Another thing you can learn from him is the appreciation of standing passes. He seems to love them because he stands as soon as he finds himself in closed guard. His standing passes are a combination of speed and pressure with his hand on stomach, knee, or chest. Another thing he pays a lot of attention to is keeping the opponent on his back. If you keep them flat it is really hard for them to do much once you have passed the guard.

Also, look how Marcelo Garcia does his knee slide. To do the same you have to get your shin in, then slide it out to the mat, replace your hip where your knee was, and rotate your body around to get the pass. And if you get it right your body will want to go straight to north/south. This is by far one of the most effective passes you can find for a smaller person, both Gi or No-Gi.

It can therefore be summed up that when you are smaller, what counts in passing the guard is speed and skillful pressure. Also standing passes and those that are really done at a pace will work better. To see how this works in practice, check out the videos below.

And if you are hungry for more techniques and tips from Marcelo Garcia, you can consider buying an instructional with his participation. In this material from BJJ Fanatics, you have a great presentation of the entire Marcelo guard passing system. Garcia shows multiple moves and techniques depending on the opponent’s reactions and movements. His explanations are concise, clear, and energetic. Even though the video is about No-Gi techniques shown by Marcelo can also be easily transferred to the Gi game. Which makes this instructional great for both Gi and No-Gi practitioners.

Guard passing regardless of your body size

Regardless of your body size, some general rules will help anyone improve their guard passing game. First, always remember about breaking grips and removing the hooks. It is important because attempting to pass a guard while the guard player has their key grips will likely be falling directly into a trap for a sweep or finishing technique. The first piece of advice is to obtain a good upright posture to prevent your opponent from breaking your balance. Patiently remove the grips and hooks that make it most difficult for you to pass the guard. Often you just must stop, remove the troublesome hook/ grip and then restart your guard pass. Trying to break through the opponent’s guard when he has good grips/hooks is only a threat to you. Additionally, by doing this you also get tired and make mistakes.

Secondly, adapt. If a given guard pass does not work out, do not go for it. Change tactics, adjust to what the opponent is doing and surprise him. And the last general advice. Keep trying to pass on the opponent’s weaker side. When it comes to passing, most of us have a dominant side. And so it happens most people, most of the time pass to their left. As a consequence, most guard players’ defense is well-practiced and sharp defending on that side. If the passer changes direction and passes to their right, the guard player is forced to defend on their much less familiar side.

And if you want more tips like this consider buying Passing the Guard: BJJ Fundamentals – Go Further Faster by John Danaher. As usual, Danaher does not disappoint, and his instructional is full of details and advice that will significantly improve your guard passing game. 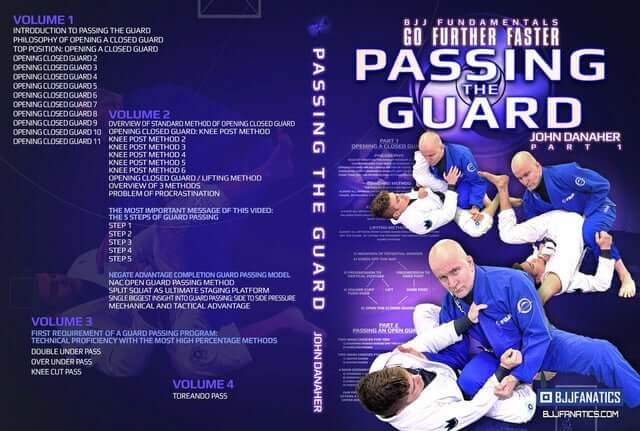