One of the reasons why BJJ competition is entertaining is because there’s a lot of variety. There are multiple passes, sweeps, submissions and techniques being executed. And, in addition, various styles when it comes to plan and style at a BJJ competition.

To be successful in a Brazilian Jiu-Jitsu competition, you need to know it is more of a mental than a physical exercise. As a competitor, you need to train your mind to be settled, not hyped nor angry. You need to learn how you can fight while laughing and smiling, but also be serious about winning. Also, be careful with your ego. Don’t convince yourself that you are the best fighter in the competition, the one that will run through everyone unless you are that good. 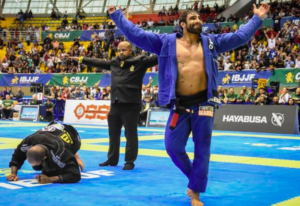 If you are fascinated by Brazilian Jiu Jitsu and you want to compete, then you should familiarize yourself with the competitive approaches mentioned below.

Lay and pray style is regularly executed by wrestlers that have recently progressed into BJJ competition. The essential idea of this competitive strategy is to win the takedown and afterward clutch your opponent from a safe position until the time runs out.

The term “lay and pray” originates from spectators watching fights of this style. They say these fighters have chosen to lie on their opponent and pray that the referee doesn’t penalize them inactivity in the competition.

2. Everything from the Guard (guard players)

This style is the opposite of the “lay and pray” style. Guard competitors usually do have a strong foundation in BJJ competition. They try to pull the guard quickly, so they can place themselves in a position called “Everything From The Guard”, where they feel safe. From here, the fighter hopes to 1) utilize the adaptability of the position to search for a submission or 2) to get more points by turning around the position with a sweep.

One of the disadvantages of this kind of play is that it’s more complex, harder to master and it requires calmness. Nonetheless, if played properly, it can bring good results.

A counter fighter can originate from a wide range of foundations: wrestling, judo, BJJ, etc. However, the most part were judo practitioners. This kind of fighter will sit tight and wait for their opponent to attack. They do this because they expect to have a fast, efficient reaction. It takes a lot of expertise and timing to play this sort of move. This style requires a huge learning base and experience, in order to peruse the opponent’s movements. One of the upsides of this style is that, when performed well, it is exceptionally efficient.

The pacesetter is a standout amongst the most troublesome contenders. This kind of fighter will endeavor to wear out their opponent by always applying weight or with sheer explosives in the execution of techniques. The opponents tend to regularly turn out to be physically overpowered or lose their poise later in the match. The truth is that these competitors are the absolute most engaging to watch compete.

Back to basics – 5×5 Strength Program for BJJ & MMA

Leg Locks – Why are they so popular and 5 basic types

Worm guard: What is it and Fundamental Techniques

10 Basic Jiu Jitsu Techniques that will Improve your Game

Basic Jiu jitsu Sweeps you Should add to your Arsenal

The Most Effective BJJ Takedowns you Should Know