Sometimes when you really like something you want to have a lot of things connected to id. There is no difference in BJJ. When you are kinda a jiu jitsu freak gis and rash guards, etc. are sometimes not enough. You want more and more BJJ related stuff. Of course, you can buy a lot of stuff like t-shirts or hoodies with some jiu jitsu slogans, etc. But sometimes you want something that will last longer than clothes. Maybe even whole your life. You want one of the BJJ tattoos. If you know you want it but still looking for inspiration this is the right place for you!

For some stuff when you say you got this specific thing related tattoo everyone got kinda the same image in their mind. For BJJ there is no such thing. Probably everyone while asked about BJJ tattoo will describe it differently. The answer to why this happens is simple. BJJ tattoos, much the same as BJJ styles, come in all shapes and sizes. In terms of meaning, Jiu-Jitsu tattoos mark everything, from belt rank, through BJJ legends to team affiliations. Below you can just find some of more common BJJ tattoos ideas. But it certainly doesn’t exhaust the whole potential of jiu jitsu related ink.

The tattooing logo of your BJJ club might be a sign of showing respect to it. At the same time, you are marking yourself as a team member very strongly. However, life goes on different and sometimes we change “club colors”. So this kind of BJJ tattoo maybe kinda risky. You know it will look a bit stupid going to training to Alliance Team Academy with big Gracie Barra tattoo on your arm.

Tattoos of Jiu-Jitsu famous athletes/ legends might be really cool and work as admiration and worship for our idols. This kind of tattoo will work the same as having ink with the face of some famous singers or actors. Someone is just so important to you, got a huge impact on your life, etc. that you just want to manifest it on your body. However, with this kind of BJJ tattoo is better to combine it also with some words about jiu jitsu. As in the example below. Because in other cases if it will be only someone’s face people from outside the BJJ world will never recognize it and put in a good context. Because despite the growing popularity of BJJ, still, Helio Gracie is not so recognizable as Hollywood actors or rockstars. 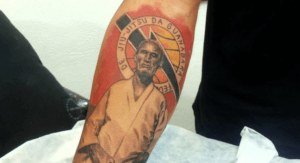 Jiu jitsu lettering tattoos or Jiu Jitsu Kanji Tattoos (A tattoo style directly linked with BJJ’s roots, ) are a kinda basic and simple idea. They are both one of the more common ones. They owe their popularity to their simplicity. Because you know what they say, sometimes less is more. Jiu jitsu script clearly shows what it is about and there is no fear of changing the club with it. The Japanese kanji tattoo with the symbols for jiu jitsu might be a little bit more mysterious but still there will be no awkwardness because of this tattoo while changing club colors. 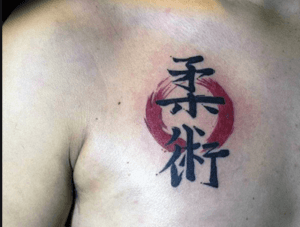 Another group of BJJ related tattoos are symbols connected with jiu jitsu. Most popular are belts or chess pawns because BJJ is called human chess. However, it might be the same case as with jiu jitsu legends. For people outside of the BJJ world this type of tattoos might be a little unclear or too general, because, for example, belts are not only in BJJ. So maybe if you want to go for the symbols it is still good to put there also some script as in the example below. 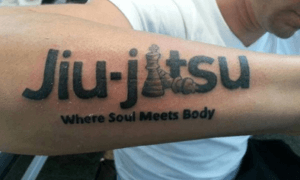 If you don’t want to go with a classic you can just use imagination and combine BJJ with something not obvious. The result might be really clever and funny. This kind of BJJ tattoo will definitely stand out from others. Below are examples of some people’s super creativity with their jiu jitsu ink. Check more HERE

So what to choose?

There is no answer to that question. World of BJJ tattoos is really wide and long. You can choose from various “classic” types or you can go completely wild and extraordinary. Only imagination limits us and maybe sometimes money 😉

See What Happened to the Thief who Wanted to Steal a Mobile Phone, but Ran into a Former UFC fighter

Police Officer Gets Guillotine Choked by a 15-Year Old

Meisha Tate Destroys Four Bros Who Challenged Her At The Gym