While the martial art of BJJ is relatively new – some of its precursors are as old as the human race itself. BJJ takes many of the core fundamentals of martial arts such as Judo and Japanese Jiu-Jitsu and nobody can trace the origin of these martial arts with certainty. What’s safe to say is that they have grown to become some of the most popular, most effective martial arts in existence.

The origin of BJJ

If you’re reading this article, then it means that you’re interested in learning when was Jiujitsu created. The Jiu Jitsu origin can be traced to one man who traveled all around the world, fighting and teaching martial arts for a living. If you’re interested in when did Jiu Jitsu start, then you need to look at the history of Mitsuyo Maeda, one of the best known and most successful martial artists of the day. He is claimed to have had over two thousand fights in his career and that he has won in all of them. 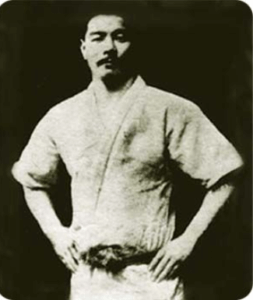 Mitsuyo Maeda decided to come to Brazil in the year 1914. There he met Carlos Gracie, a then 14-year-old adolescent that was eager to learn some of the Judo techniques that Mitsuyo taught. Carlos learned quickly and one day opened his own martial arts school where he taught what he learned from Maeda. Carlos had a little brother, Helio, who had a frail body and constitution. He was sick very often and he was deemed too frail by his family to learn martial arts – he was relegated to just watching his brother teach the art.

One day, as the legend goes, Carlos was late to classes and Helio offered to teach the students in his behalf. Just by watching the techniques while his brother taught them, Helio managed to get a deep understanding of the main principles that stood behind the techniques. When Carlos finally came to class, he apologized to the students – but surprisingly, they all said that they had a great time learning under young Helio. This is widely considered to be the origins of jiu jitsu.

The perfecting of BJJ

Even though he knew most of the Judo styled techniques that his brother and Maeda thought, Helio found that he had great difficulties in performing some of the techniques due to his frail constitution. So, he had to find a way around this. He modified the techniques that he knew so as to use as much leverage as possible and much less strength than they originally required. With this, he managed to instill the principles of leverage in BJJ which make this martial art very effective even when used by physically frail people against stronger people. Helio Gracie is widely regarded as the founder of Jiu Jitsu and he’s considered the person who created Jiu Jitsu. 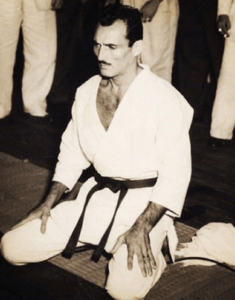 Spread of popularity of BJJ

Helio grew more and more confident in his patented Gracie Jiu-Jitsu techniques that he and his family issued the notorious Gracie challenge – any fighter in the world that would like to test the effectiveness of BJJ would be able to find against a member of the Gracie family. The Gracie Jiu-Jitsu practitioners ended up making short work of their opponents and so the reputation and the popularity of BJJ grew around the world, cementing Helio’s place in Gracie Jiu Jitsu history.

One of the greatest matches in the century was that of Helio Gracie vs Masahiko Kimura – Helio lost the match via an armlock which eventually became known as the Kimura lock. However, Masahiko Kimura was so impressed by Helio’s techniques that he asked him to teach some of them in his country. A little while after that, Helios sons Rickson and Royce started to take the world by storm with the help of BJJ. In particular, Royce Gracie was responsible for the rise to fame of BJJ all around the world because of what he did in the first UFC event when he won the tournament against lot bigger opponents. Parallel to this – Rickson Gracie started his own MMA career and fought in Japan – he never lost a match in his professional career.

In modern times it is accepted as gospel that BJJ is one of the fundamental techniques that people should use in fights. People quickly became privy to the fact that even world-class boxers and kickers were torn to shreds by Gracie Jiu-Jitsu practitioners in a matter of minutes and everybody started to train grappling – in particular, BJJ. Nowadays there are many BJJ schools around the world and BJJ is one of the most popular martial arts in existence. There are even some different systems of BJJ that all but fly in the face of conventional Gracie Jiu-Jitsu theory – Eddie Bravo’s tenth planet Jiu-Jitsu is one of them.

The martial art of BJJ has its firm place in history cemented by the exploits of Carlos, Helio, Rickson, and Royce, among others. The history of Jiujitsu was pretty tumultuous at times. It’s to be expected that this martial art will continue to be refined and improved for a long time to come. So, if you feel interested in learning this martial art, then why not visit your local BJJ school whenever you have the time to do so? We think that this would be a very smart move on your behalf if your goal is to learn world-class martial arts.