Before BJJ was a sport with its own rules and limitations – a sport in which thousands of people from all around the world compete – it started out as a martial art that was used for self-defense in a real fight. So, if you think that BJJ has no potential to save your life in a street-fight, then we would have to tell you that you’re wrong. Some of the techniques in the arsenal of BJJ are very practical for use on the streets. Right off the bat, we must mention the fact that the BJJ techniques for street fighting are only to be used against a single opponent. What good will it do if you get to the mount position on one of your opponents if your other opponent comes running from the side and kicks in the face? So, while it’s important not to underestimate the practicality of BJJ in street fights, it’s also important not to overestimate it. Read more about The Most Effective Jiu-Jitsu Techniques For A Street Fight

The Most Effective Jiu-Jitsu Techniques For A Street Fight

One of the most useful things that are widely practiced in the sport of BJJ but that can also be used in a street fight is the double-leg takedown.  While this is a wrestling move at its core – it still finds heavy use in the world of BJJ. You will need to learn to find the optimal moment in order to perform the move. This will be when your opponent’s attention is not focused on his legs. Then you should do a quick level change and shoot for the legs. Grab his legs and start rotating them – you will end up in side-control after slamming your opponent to the ground.

Chances are that a normal person will not know how to defend this move – it takes practice for anyone to be able to counter the takedown. You need to be aware that you could still, by accident, run up to your opponent’s knee with your face – and the result of this won’t be any good.

The next move that we urge you to learn for street fights is the rear naked choke. This will give you the option to strangle your opponent if you manage somehow get behind him. It’s a very effective move and it will cut the flow of blood to your opponent’s brain – making him sleep. It’s a very “peaceful technique” and you won’t do any severe damage to your opponent – it’s great for calming someone down without actually hurting them. 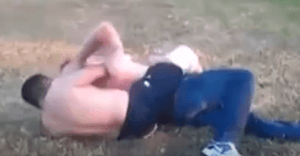 If you roll on the mats with people that train alongside you, you will typically find out that in the beginning, it’s very difficult for you to execute an armbar. Your opponents will typically expect this move and they will do their best to protect their arms. In order to perform this, move you must hit the right moment and the right mechanics of the move – which is not an easy thing to do. But you’ll be surprised to learn just how easy it is to do this move to an opponent that’s not cognizant of its intricacies.

If you can get to the mount position on the streets, you will most likely get a reaction where your opponent will throw his arms in front of him so that he can protect himself. Well, this will leave them perfectly open for an armbar. Bear in mind though that you could seriously injure your opponent with this move – you can break his arm at the elbow. It’s likely that you won’t get a tap out on the streets so you have to be prepared to go to the bitter end.

You should know how to perform the triangle as well. If you can do it with relative success on the mats – then it will be a lot easier for you to do it on the streets when you’re fighting one on one and you’re in the bottom guard position ( not the most ideal position). If you can put one of your legs on top of your opponent’s neck while isolating his opposite arm and then squeezing your leg with your other leg in the form of a triangle – then your opponent will go to sleep soon enough. This move, unlike the armbar, is a “peaceful” one. Putting your opponent to sleep for a few seconds is a lot better in most cases than breaking his arm. But the more techniques you have under your belt – the better the odds you will have of winning a street fight with the help of BJJ. 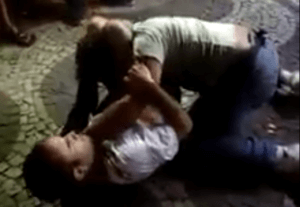 Mount, back and side control

Finally, we suggest you learn how to hold the side-control position and the mount position – it’s very probable that if the fight goes to the ground you will end in one of these positions. Note that the reverse holds true – your opponent may also fall on you in side-control or in the mount, so it’s important to learn how to escape from these positions with the use of bridges and hip-escapes. If you can learn how to control your opponent in side control and mount then you will diffuse a big part of his power to hurt you in any way. You will have full control and you will be able to do whatever you like to your opponent from the superior positions. 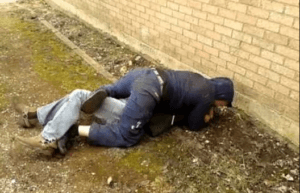 Be mindful that the right course of action is to never fight unless you absolutely have to. But if you find that there is simply no other course of action that you can take – then the use of these BJJ techniques may end up helping you win the fight and go about your business unscathed. The Most Effective Jiu-Jitsu Techniques For A Street Fight are ones that are considered best to learn in any for of BJJ