Brazilian Jiu-jitsu is a relatively new sport and potential consequences are not well-known or researched. This sport is a submission focus martial art and a big portion of these submissions are chokes. Most of the chokes are deliberately targeting arteries in the neck which can be a predisposition to certain injuries. The article in the of Journal of Cerebrovascular and Endovascular Neurosurgery sheds some light on the possible risks from training BJJ.

Stroke as result of Brazilian jiu-jitsu

A possible consequence of training BJJ is carotid artery dissection which can result in a stroke. Although this condition causes only 2.5% of all strokes, it’s the leading cause of strokes in patients younger than 45 years old. Overall, the mortality rate of this condition is 3-4%, with satisfactory outcome in 75% of cases. This condition was also described in sports like MMA, Karate, kickboxing, and kung-fu, mostly due to its direct impact via kicks and punches as probable cause. In Brazilian jiu-jitsu, the causes probably involve carotid artery compression in certain positions and hyperextension of the neck, with a contralateral head rotation. The traction of some submissions can stretch and rupture the carotid artery. The most commonly mentioned submission in this context is the Rear Naked Choke or the Lion Killer. 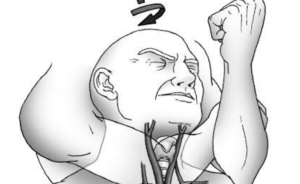 Often times, the carotid artery dissection can be hard to diagnose because its symptoms can be minimal, transient and can be delayed months after the period that the initial injury occurred. Most commonly, the symptoms are:

What you should do…

No sport is considered completely safe. This is especially true regarding martial arts, who were originally created to disable and kill an opponent. Although the carotid artery dissection may not be very common, the awareness of this condition and its associated risk with the BJJ practice (and other combat sports) should be known. The potential consequences of a long-term damage induced by multiple chokes are still not well researched. Therefore when sparing, you should take percussions before there are lethal or disabling consequences. There is a slight chance for this to happen to a normal healthy individual but in any case, it is better to be well informed.