Some things become outdated very quickly. Just yesterday they were valid, today they have no value. Other things, however, stand the test of time. Even after many years they are valid and do not lose their value. And this is the case with the rules of life created by samurai Miyamoto Musashi. They are over 400 years old and still actual. Below you will find these 21 rules of life that will change you and will improve your life and BJJ at the same time.

Miyamoto Musashi was a Japanese rōnin living at the turn of the 16th and 17th centuries. He has fought over 60 documented duels in his life and has never been defeated by any swordsman. Miyamoto Musashi won his first duel when he was only 13 years old. Moreover, this legendary swordsman was the founder and at the same time the greatest master of the niten’ichi-ryū – a martial art involving fighting with two swords: a shorter wakizashi and a longer katana. The use of two swords was regarded in Japan as the pinnacle of fencing skills. Most warriors used only one sword. Despite this, Musashi Miyamoto made fighting with two swords famous in all of Japan.

He was also the author of Gorin-no Sho (The Book of Five Rings). Musashi’s treatise raises many issues – it tells not only about martial arts, but also about the proper state of mind and spirit, about the importance of dominating the opponent during a fight. Besides, in “The Book of Five Circles” Musashi criticizes other schools, passing on his own “path” (philosophy and the right attitude in life). He can even be called a Renaissance man. This Japanese warrior was not only a swordmaster but also a painter, poet, and craftsman. And now he is known not only for his mastery of the sword but also for his rules of life.

Just before he died, Miyamoto Musashi wrote a short work called the “Dokkōdō” (“The Path of Aloneness”, “The Way to Go Forth Alone”, or “The Way of Walking Alone”).

It is in this text that, still valid rules of life of this warrior can be found. Dokkōdō consists of 21 precepts and expresses a stringent, honest, and ascetic view of life. Some of these pearls of wisdom may sound confusing or incomprehensible, so there is also a little explanation for them.

1. Accept everything/life just the way it is.

There are situations, struggles, problems in life that we simply cannot control. We simply have no influence on them. Not accepting such a state of affairs, trying to object it’s like fighting a battle that can’t be won. It only leads to frustration, therefore it is better to accept life as it is. It is because some things we cannot change, but we can always change our approach to them.

2. Don’t seek pleasure for its own sake.

It is often said that life is about the journey, not the destination. The point is that often while chasing something, we forget about other things along the way. And it’s the same thing here. You should enjoy the moment and get pleasure in the process, not chase pleasure at all costs.

3. Do not depend on a partial feeling.

To make the right decisions, we need to be fully informed first, not act impulsively on hearing a thing or two. Decisions that appear from partial feelings are just rarely well thought out. To avoid bad decisions it is better to stick to knowledge, use mind, and don’t act on impulsive emotions.

4. Think little of yourself and strongly of the world.

While being obsessed with yourself, your own world, you end up missing a lot of the real world. Instead of thinking about yourself more than necessary, it is better to think about what can be done for other people, animals, the planet, etc. So just don’t be a selfish egoist and everything will be better.

5. Be separated from desires your whole life long.

The more you have, the more you want. And such never stopping desires make us only want things we may never gain. Which again can only lead to frustration and sick obsessions. So the point is to be thankful for what you have, live not wanting more, and wait for good things to come naturally.

6. Do not regret what you have done/ Never live in regret.

The past cannot be changed, and everything that happened, happened for a reason. And now it’s all part of your life. The life you should accept as it is. Dwelling on things you once did can’t change them. So, just don’t waste your time on regrets, it’s pointless.

Jealousy is a form of hatred, and living in it can destroy you. So, don’t ever be jealous of others, and simply be thankful for what you have.

8. Never let yourself be saddened by a separation or loss.

Constant thinking about a sad parting of our loved ones prevents us from moving on and continuing our lives. Since there is no way to bring back the dead, they should be left behind in the past. Drowning in grieving when someone dies won’t bring them back.

9. Resentment and complaint are inappropriate for oneself or others.

Many of us find comfort in complaining when things go wrong, unfortunately, by doing that we live in the past. And instead of this, it is better to let these bad things just pass us by. Dwelling on stuff we cannot change only prolongs the past hold over our lives.

10. Don’t let yourself be guided by the feeling of lust or love.

We are often blinded by strong feelings such as lust or something that at a given moment seems to be love. And while being blinded, we make bad decisions more often. So it is better not to be guided by them and rely on your mind and knowledge.

11. In all things have no preferences.

It’s not about disliking any things at all. The point is to stay open-minded and not limit yourself to any of your preferences and thus avoid various opportunities.

12. Be indifferent to where you live.

Whether you live in a large villa or a tiny apartment, a huge metropolis or a small village, in one country or another should not matter. It should not affect your conduct or your values.

You should eat out of necessity, not for pleasure. Food should only be your fuel, not an end in itself. Thanks to it, you will not be constrained by gluttony.

14. Don’t hold on to possessions you no longer need.

Attachment to things is limiting and anchors us in the past and our desires. The possession of material goods should not be related to our level of happiness. That’s why it’s better to let go of things that no longer serve any purpose, even if we are somehow emotionally attached to them.

15. Do not act following customary beliefs.

Most are not always right. So don’t just blindly follow what the crowd and other people say. Instead, keep an open mind, allow your own thoughts and beliefs to have space, form your ideas.

16. Do not accumulate weapons or practice with weaponry beyond what is useful.

Weapons should be used for defense, not to initiate reasonless attacks. It should only be a tool, so there is no need to pay too much attention to it.

Fearing death only prevents you from living life to the fullest. So instead of worrying about death, it is better to love life and enjoys every day of it.

18. Don’t try to possess either goods or fiefs for your old age.

Again, we do not need possessions to live happily. So, instead of accumulating things for old age, it is better to live in the moment. It is because we do not know what the future awaits us. And by focusing only on gathering goods for the future, life here and now may pass us by.

19. Respect the gods, but don’t count on their help.

You should respect and look up to the gods, prophets, sages, generally any force majeure you believe in. They should serve you as signposts. However, you cannot trust them with your entire life path. Your destiny is in your control, you must make your own decisions and take your path.

20. You may reject your own body, but you must save your honor.

The point is, all other things are less important than honor. You can forsake anything but honor. It is because following your own beliefs and living honorably is the only way you should live. Without honor we are worth nothing, it is it that determines our value.

The Way is your path of life. Things you have dedicated yourself to, your goals and plans, activities you want to do until you die. So once you’ve found such things, you shouldn’t give them up and start over and over again. Rather, you should persevere and stay on your way. For this is the only way you can lead a happy life, not to be anchored in the past and regret.

This text and other works of Miyamoto Musashi are full of inspirational information, which rightness he confirmed with his own life. This legendary swordsman lived to the fullest and entered history for good. So his rules of life seem like a way to achieve the same satisfaction. If you are interested in all of this and you still feel unsatisfied, fortunately, you can find many Miyamoto Musashi works translated into different languages ​​on the Internet. Just check this link! 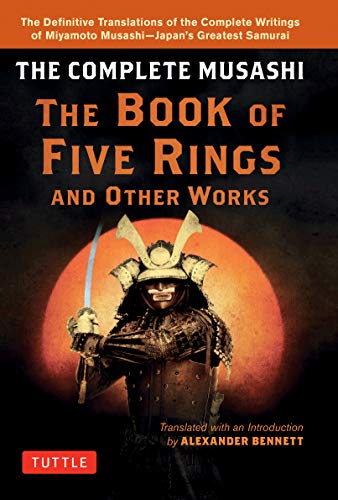