If you are already part of the BJJ world for some time you almost certainly know what International Brazilian Jiu Jitsu Federation is. You probably also heard the name BJJ Globetrotters before. Besides, if you follow the news carefully then you probably know that BJJ Globetrotters has recently been banned by IBJJF. If no or you are just not certain of all your information, below you will find the most important details on what this is all about.

BJJ Globetrotters is an initiative founded by Christian Graugart – blogger and huge Brazilian Jiu Jitsu enthusiast. As they write about themselves they are a worldwide community of travelers against jiu jitsu politics. They offer an alternative to traditional affiliation within BJJ. Membership of the community is open for anyone (both individuals and academies). Globetrotters are not affiliated with a specific person, club, coach or lineage. As they say, the main requirement to join is only to spread and agree with their message. BJJ Globetrotters is simply a community of people, who share a common set of values. These values ​​are:

For years, BJJ Globetrotters has been a source of communication for people willing to train outside their own country. As well as compete at IBJJF events under the association’s banner. Their Facebook group gathered more than 24,000 enthusiasts of Brazilian Jiu Jitsu, where they could help each other in finding BJJ academy to train in, place of stay, accommodation, etc. You could even meet there someone who would invite you to stay under their roofs and look after you during your stay. 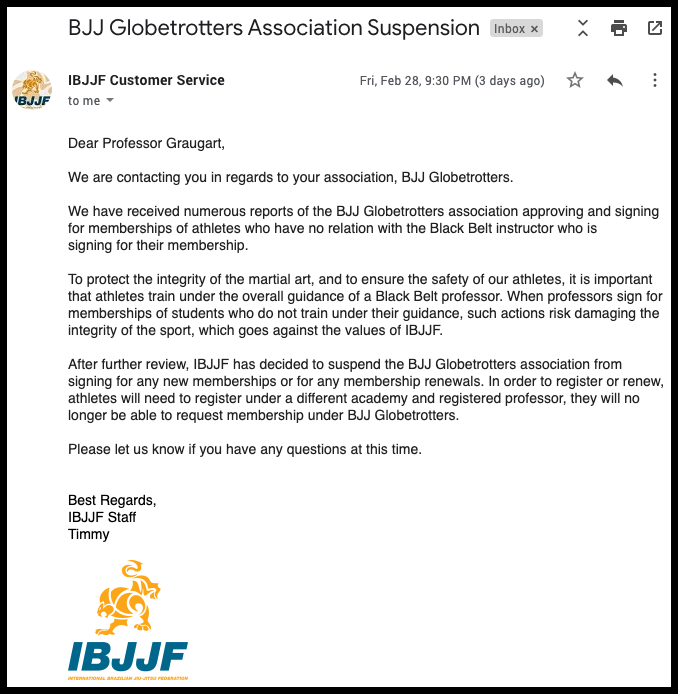 IBJJF email in a nutshell

In the IBJJF email, it is written that BJJ Globetrotters is approving athletes who have no direct contact with the Black Belts singing their memberships. According to International Brazilian Jiu Jitsu Federation, this might be dangerous for competitors and threatens the integrity of the sport. Therefore, IBJJF simply decided to ban BJJ Globetrotters.

Graugart wrote an explanatory article on the BJJ Globetrotters website, however, due to heavy traffic the server went down. Despite the case is already a few days old, their website is still not working. You can read there info they are currently upgrading the website to handle the increased traffic. Fortunately, Christian Graugart words can still be found in other sources.

A little over three days ago, I received an email from the IBJJF, letting me know that BJJ Globetrotters, as an association, has been suspended from their federation. The accusation is that we have been approving and signing for athletes that have no relation with the signing black belt instructor. According to them, we are going “against the integrity of the martial art and safety of the athletes” since “it is important that athletes train under the overall guidance of a Black Belt professor”.Naturally, I immediately responded to their email:

This is not different than how pretty much every major BJJ affiliation around the world works. The head black belts who sign the forms for their affiliate academies’ members have, in most cases, no more relationship with the athletes than we do. In fact, our community is very tight knit, as more than 1,800 of our members meet around the world at our camps over 10 times every year. Everyone at all levels train hard, network and make friends. On a regular basis at the camps, I see and train with countless of the athletes I have signed IBJJF forms for. These are people I consider great friends and valuable training partners. Some of those who do not have instructors at home, choose to receive their belt evaluations from the combined opinions of the camp instructors. But apparently this is not enough to qualify as “overall guidance” from my and the other black belts’ side.

At the end of the day, the main difference between BJJ Globetrotters and any other large affiliation is, that we charge no money for what we do.

I have to this date still not received a reply to my email, but all our members’ IBJJF memberships have been abruptly cancelled and we are getting a lot of emails from concerned athletes with upcoming competitions, so we can not postpone this announcement any longer. I am deeply sorry on behalf of our many hundreds of athletes around the world who are actively competing for BJJ Globetrotters, producing fantastic results at all levels, from white to black belt, from amateurs to professionals. While we are not an affiliation in the traditional (IBJJF-)sense, we ARE a community of highly passionate practitioners who believe that training relationships in Jiu Jitsu should be based on friendship, not business. That everyone should be treated equal on and off the mats. That people should be allowed to train with who ever they want. And that access to competition should not be based on contractual agreements with anyone at the top of an imaginary hierarchy based on pieces of tape on cotton belts.

While IBJJF is a private, for-profit company that can make whatever rules they like, I don’t think anyone should have monopoly on how a BJJ affiliation is defined. For those who agree that what we do also qualify as one, we are in fact the biggest in the world, with more than 750 registered academies. And I’m incredibly proud that we are so many who stand up against common perception of how things are “supposed to be done”. We’re not going away any time soon.

If you are affected by this recent decision by IBJJF, I suggest that you email them directly on ibjjf@ibjjf.com and let your opinion be heard. I’ll keep doing the same for you.

His response in a nutshell:

Christian Graugart in his statement wrote down arguments for the fact that the association’s activity complied with IBJJF standards. He highlighted that his organization filled in IBJJF start forms for all the members, like any association in the world. Also said they verify the rank of belts for everyone with whom they conclude a contract, as well as with their instructors, etc. He also mentions his belt checker website which allows checking for free the rank of BJJ competitors to confirm that they had a given rank. It is the first free site of this type, unlike the IBJJF website, which requires a membership fee.

The competitors and supporters of the association reacted quite violently to information from IBJJF. Many people were outraged by their decision. And did not hesitate to publicly share their opinion on the organization’s fanpage. Indicating on Facebook that they “do not recommend” IBJJF. Before Graugart’s announcement, their average grade was 4.6. Currently is only around 2.5 / 5 (and still seems to be falling). People are also saying that the International Brazilian Jiu Jitsu Federation is all about profit, not about the integrity of the jiu jitsu community. Internet users’ reactions can be observed even in the form of memes, many threads on Reddit, or even a change in the content of the IBJJF page on Wikipedia. Now on a wiki, you can read they are is a for-profit company. Some people are even harsher and commenting that the International Brazilian Jiu Jitsu Federation is just a trash organization.

With Graugart’s permission, Jason Scully from the Grapplers Guide offers his help for all Globetrotters competitors who have already paid for the upcoming IBJJF competition. For details click here. Also if you want to voice your opinions on the matter you can contact the IBJJF directly at ibjjf@ibjjf.com as Graugart’s encourage.

How to Achieve Longevity in BJJ?

BJJ for Beginners – The Ultimate Guide to BJJ

How to Boost Testosterone Levels Naturally for Jiu-Jitsu

Grips for Gi and No Gi you Should Know

Dolce Diet – all you need to know about it

Jiu Jitsu World League – All you Need to Know