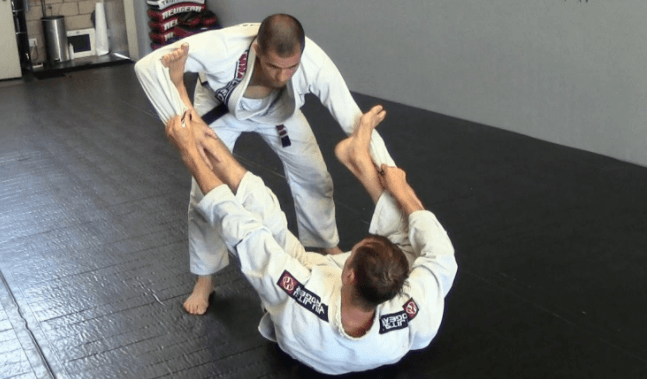 BJJ is a relatively young sport and its still under constant development by its students and masters. There are constant new additions to new moves and styles – including basic guard positions. One of the “latest” entries in the sport of BJJ when it comes to the guard is the so-called spider guard.

There are many different techniques that you can try out from the spider guard. Time and experience have shown that this is a very powerful guard indeed. However, it’s not for everybody – some people would like to work on something a bit simpler. And the fact of the matter is that this is a GI-specific technique and it can be hard for your fingers. However, with proper finger tape, this problem can be minimized. Regardless, if you feel drawn to the spider guard – make sure that you invest many hours in practice if you wish to learn it properly.

How to do the spider guard

The spider guard is not as simple to perform – at least when you compared it to the traditional full guard. If you know anything about it – then you know that your opponent will have to wear a GI for it to work. You need to use both your arms and your legs in unison to make this move work.

Then you need to grab your opponent’s other sleeve with your other hand. This time you need to pull down hard on it – and use your retracted leg to push your opponent’s elbow to the side. And this is the basic spider guard position. From here you can switch your sides – you can push with one leg vertically and with the other to the side – and vice versa. This is, in fact, a great drill for you to practice if you wish to learn the spider guard properly.

Basic techniques from the spider guard

The most basic thing that you could do from here is the good old triangle. As most of you know – the triangle is one of the most fundamental moves in the entire arsenal of BJJ. As it turns out – it works great with the spider guard. All you need to do is to throw your opponent into a lull by constantly switching up your spider guard. At one point you will be able to pull him towards you and throw one of your legs on top of his neck. Pull his other arm towards you and to the side and close the triangle. This will result in a tap out.

This move feeds off of the sweep from the previous paragraph. If you manage to set your spider guard sweep properly up until the moment when you do a hip-escape and you’re prepared to sweep your opponent – then you’re in the basic position. But your opponent may try to block this move by moving to the side – you will no longer have the leverage to sweep him in this way. However, your opponent will now inadvertently place himself in an even bigger danger – armbar. You will be able to throw both your legs around your opponent’s arm and over his head – and this will result in a sure tap out.