As is the case with most other martial arts – there are belts in BJJ. There are also a few different jiu jitsu belts level.  This is not to say that there are undeserved belts – but most of the time, the jiu jitsu belt colors will symbolize the level of skill of the practitioner that wears the belt. 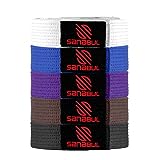 Sanabul have a really admirable reputation in BJJ for being one of very well made BJJ products on the market with really affordable prices. The IBJJF has agreed and put their trust in Sanabul BJJ belts for being a reliable gear in competition as well as in regular training. This belt has a superior durability trait and will withstand hard training sessions and competitions. It is commonly available in standard Brazilian Jiu-Jitsu belt colors such as; Black, White, Brown, Blue and Purple jiu jitsu belts. One of its amazing traits is that it doesn’t shrink in the wash. The belt also has the thickness trait. This belt comes in several standard sizes which makes its availability easier. 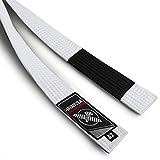 It is made with a high-quality fabric. They are built to last for long. Every belt is designed with an eye-catching patch featuring their signature Hayabusa peregrine falcon. Their signature includes two traditional kanjis, which represents courage and honor. This belt has double stitching on it. It is designed with gold spec weave material and will twill cotton to provide best of the strength and durability. This belt is lightweight that gives an upper hand maneuverability of a fighter. This belt also has it traditional branded patch detailing on it that makes it a stand out. 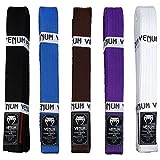 These are purely made of high quality cotton. They are well known to be thick and study. They also come with their own signature patch that is embroidered on their belt. They are really resilient and reliable, they will not wear off anytime soon.

This belt is made with a really high quality pearl weave fabric that makes it a perfect belt for BJJ. It is embroidered with Hypnotik labels to give the recognition that it deserves. It is really a long lasting belt that will maintain its shape and color even after years.Hypnotik Pearl Weave Premium BJJ belt will definitely live up to its name. Once the fighter wears this, the obvious difference will be noticed that will urge the fighter to never go back to regular BJJ belts.

So, if you’re interested in learning more about the jiu jitsu belt rank, then you can read the rest of this article. There are 5 main different colors of BJJ belts for adult practitioners. The colors are white, blue, purple, brown, and black. There is also a special color of belts – red belts – and they are given to the most deserving BJJ practitioners in the world that have done something big to improve and promote the art.

This is the first belt that you will wear as a BJJ student. Most anyone is deserving of this belt and by default, you start with it. White belts are food for the sharks at the beginning – the senior white belts and the blue, brown, and black belts will have their way with them. It’s important for you to not get disheartened here and to continue your training – following the instructions of your instructor. With time, you will learn the basic moves in BJJ – basic submission, sweeps, and escapes from an inferior position. With time you will get more confident in your rolling skills. Then you will progress to the next belt.

The blue belt is a time in the career of the practitioner where he will likely learn many different BJJ techniques. He will cement his knowledge of the basics and learn some new and more advanced techniques. During this phase, you will have to invest hundreds of hours of dedicated practice in order to progress – and then you can progress to the next belt.

The BJJ purple belt is when you will start to create your own distinctive style in BJJ. You’ll find out that it’s a lot easier for you to perform certain techniques due to your preferences and body composition. You will start to refine these techniques until you can do them very smoothly and effortlessly. This belt signifies a phase when you can start to instruct the lower belts.

The senior practitioners – those with years and years of experience in BJJ – may advance to the level of brown belt. You will continue to improve and refine the techniques that you already know and improve the knowledge of the art.

This is the highest belt that you can get after you achieve mastery in the art. This is a time when you will be called a “professor” as it signals that you have mastered the art of BJJ.

This is the highest honor that anyone can receive in BJJ. There are only a handful of people in the world with these belts and it signals that they have made marked contributions to BJJ. According to IBJJF rules, you have to be a black belt for 31 years before you will be eligible for a red belt.

There are also intermediary steps between the belts – they come in the form of stripes. There are up to four stripes on every belt level and each stripe means that you’re improving your skill in BJJ and progressing to the next level.

If you wish how to learn to tie the belt – then there are many videos on YouTube that will detail the process. It’s easy to learn and it’s difficult to forget.

The junior jiu jitsu belts are given to the younger practitioners. There are the white, grey, yellow, orange, and green. This is due to the fact that the younger practitioners can’t really get the experience they need in order to truly master the art of BJJ – it takes years of practice for this. In this sense, the art of BJJ is a lot more conservative with its belt system. If you’re a parent and you wish your kids to get a black belt – then you can enroll them in another martial art where they dish out black belts for everyone.

With persistent practice, you too can grow in the ranks of the BJJ belts. Just make it a point to not put your focus entirely on the color of your belt – it’s more important to be centered on the art itself and try to progress. The belts will come as a result of this.