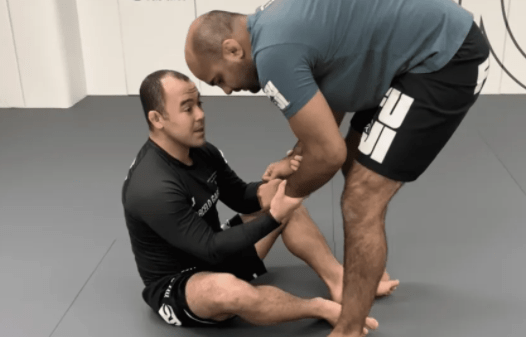 In BJJ you can distinguish between these more and less traditional positions. The ‘classics’ ones are full guard, side control, and mount. While the less traditional movements and positions are for example rubber and the worm guard. There are also things in between. And the butterfly guard is just such a position somewhere between classic and non-traditional moves. Despite its not fully defined position and being somewhere ‘in-between’, it is quite a popular and important guard that is simply worth knowing. Therefore, to better understand how this position works, below you will find information about butterfly guard and the best butterfly guard DVDs and digital instructionals.

The butterfly guard can be a very powerful guard if you know how to use it properly. It will take you some time to master it, but in theory, it is very simple. In order to enter this position you only need to place your feet between your crouching opponent’s legs. And that’s all – it is the butterfly guard, from which you can do a variety of things like sweeps and submissions.

Butterfly guard is especially effective when it comes to sweeps, it really offers a lot of possibilities. The easiest sweep from this position is the one with grabbing your opponent’s torso with both of your arms. To make this work you need to have underhooks. Then, as a next step, you pull down your opponent on top of you and use one of your legs to push his opposite leg into the air. If you do this properly, you end up in a mount. While in the worst-case scenario, you will sweep your opponent, and enter the top full-guard.

Another really cool move from butterfly guard is the arm-drag to back control, which does exactly what its name implies. To perform it, you need to grab your opponent’s opposite triceps with one of your arms. Drag it and your opponent will lose balance. At the same time, scoot your butt to the outer side. It is important because this will give you the perfect chance to take your opponent’s back. It is a very effective move when it is made very dynamically and precisely.

As mentioned above, you can really do a lot from the butterfly guard. And sweeps aren’t the only ones here, this position also offers numerous submission possibilities. One such technique is the arm bar from the butterfly guard. To perform this, as a first step use the underhook to help elevate your opponent’s arm. Next, with a gable grip connect slightly above the elbow to control your opponent. Then it only remains to finish the armbar.

Another great submission that you can do from the butterfly guard is a triangle choke. The best moment to do this is after a failed sweep when the opponent uses his hands to post in order to prevent a sweep. What you need to do is to use your arm to grab the wrist that your opponent is using to balance. Then bring your leg, from the overhooked arm side, around your opponent’s back. Next, bring your other leg knee to your chest and around your opponent’s base arm. What only remains is to adjust your legs and body to finish the full triangle choke.

The things suggested above are just the tip of the iceberg. Much more can be done from the butterfly guard. To understand what amazing things you can do from this position, it is good to watch videos about butterfly guard. And that’s exactly why below you will find the best butterfly guard DVDs and digital instructionals.

​Marcelo Garcia, also known as “Marcelinho,” which is a friendly way of saying Marcelo, much like “little Marcelo” is a true BJJ legend. Born in 1983, Marcelo is a four-time ADCC and five-time IBJJF World champion. He is one of the most creative BJJ athletes out there, really one of a kind. Marcelinho is famous for his mastery in such moves and techniques as arm-drag, X and butterfly guard, guillotine, and Mata Leao. His BJJ Academy in New York City is well-known and considered to be one of the top Brazilian Jiu Jitsu schools in the world. One of the reasons why this is so is because Marcelo is not only a great competitor but also an amazing coach, with incredible teaching skills.

The fact of how good trainer Marcelo is can be seen, among others, right here in his butterfly guard instructionals. It is comprehensive, detailed, yet easy to understand. ​Marcelo gives clear and precise instructions that are easy to follow. What’s really cool is that this material it’s not just a list of techniques. Marcelo Garcia also introduces fundamental concepts in addition to techniques. He not only talks about how to do something but also why, what for, and when. This means he will teach you great sweeps and a couple of submissions, but at the same time also show some fundamental positioning and concepts. And as a result all of this together will improve your butterfly guard, regardless of your BJJ level. This is simply a great instructional that will work great for all belt colors. 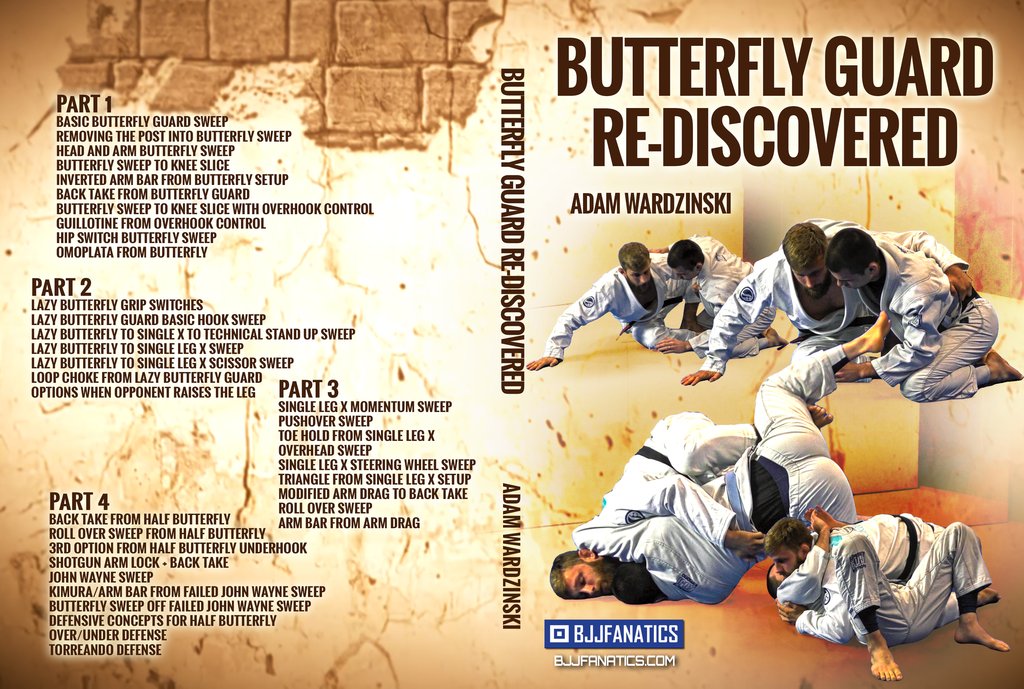 Thanks to this material, where Adam reveals his secrets, you will transform your entire jiu jitsu game, and learn how to defeat even bigger and stronger opponents. He breaks down techniques and chains them together well to help build a whole system with a lot of sweeps, submissions, and transitions. His butterfly system is simple, yet so effective. And things presented by him will give you a fresh look at this whole guard.  Moreover, Adam’s teaching style is just very clear, and his explanations are easy to understand. In conclusion, this instructional will be good for everyone looking to improve their butterfly guard game. It is simply eye-opening.

The Modern Butterfly Guard No Gi by Jon Satava 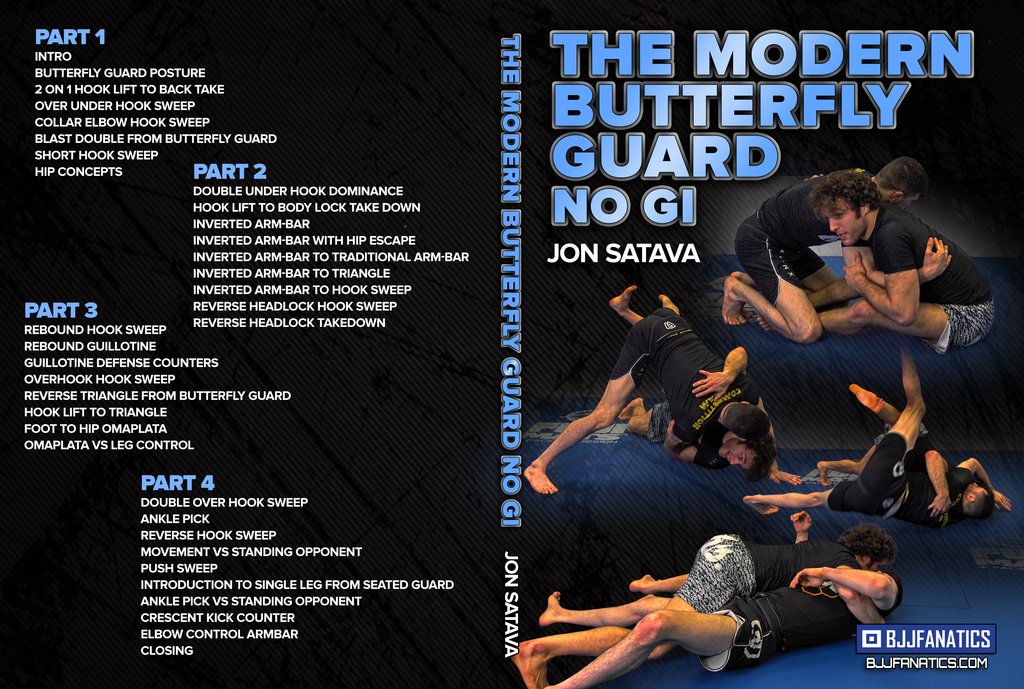 Jon Satava is a BJJ black belt under the legendary, above mentioned, Marcelo Garcia. He is being part of the golden generation of grapplers derived from Garcia’s New York Academy. Besides Satava, this group also includes Dillon Danis, Matheus Diniz, Mansher Khera, Marcos Tinoco, and Dominyka Obelenyte. The fact that Jon is a great grappler is evidenced by his victories in the various competition. Among others, he is a World No-Gi and Pan American Championships both in Gi and No-Gi winner in the lower belt divisions. But more importantly, like Marcelo, he is a great butterfly guard player, which he proves great in this material.

In this butterfly guard DVDs  Satava shows that he feels excellent not only as a competitor but also as a coach. His teachings are to the point, succinct, yet highly detailed. Every position is well explained. And most importantly, the solutions he shows are applicable to both Gi and No-Gi and will work for and against smaller and bigger people. Jon simply presents a comprehensive system that will give you a good idea of the ​​modern butterfly guard.