Half guard is now considered one of the fundamental positions in BJJ. However, this was not always the case. Formerly it was considered only as a transitional position. The half guard was underrated and seen as a not valuable guard. However, this has changed a lot in recent years. And now the half guard can no longer be forgotten and underestimated. It’s just a too important element of jiu jitsu to be treated like that. Therefore, instead of underrating it, it is worth getting better at half guard. And one of the best ways to improve your game from this position is to watch instructionals videos. Therefore, below, more info about the half guard itself as well as best half guard DVDs and digital instructionals.

The origin of the half guard is unknown. The beginnings of this position cannot be clearly indicated. It doesn’t mean, however, that we don’t know anything about it. Under the name niju garami, it was used in Judo in the first half of the 20th century in Japan. Then half guard traveled from there to Brazil. And it was there that this position was revolutionized at the end of the 20th century. It was in Brazil in the 90’s that the half guard as we now know it was created.

And when it comes to the modern half-guard, it is a ground position in which the person on the bottom (with the back towards the mat) by using both of the legs controls one of the opponent’s legs. It is a great way of controlling the distance between the bottom and top grappler. While in the half guard, the goal of the person on top is to untangle the leg and obtain side control or mount. And the job of the grappler at the bottom is instead to transition into a closed guard or try a sweep or some attacking technique.

Different versions of half guard

If you thought there was only one half guard then you are wrong. There are many different versions of this position. And they differ in such factors as the distance from the opponent, the specific arrangement of the limbs, etc. Considering these differences, we can distinguish such types of half guard as:

Attacks from Half Guard

Now that you know the different types of half guard, it’s also worth learning about attacks possibilities from this position. There are several effective submissions from half guard depending on the position you are in. These are e.g.

To understand that the above positions and submissions are not only empty words but also very practical things, it is worth getting to know grapplers famous for their use. Competitors very well known for their half guard are, among others, Bernardo Faria, Tom DeBlass, and Eddie Bravo. They all have contributed hours upon hours to developing half guard and paved the way for innovations in this position.

After such encouragement to use the half guard, there is nothing else to do but to start improving your game from this position yourself. And a great way to polish your skills is by watching instructional videos. That’s why below you will find the best half guard DVDs and digital instructionals.

The Battle Tested Half Guard by Bernardo Faria 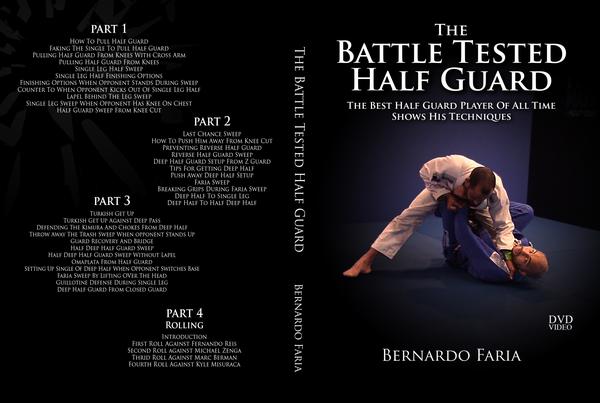 Bernardo Faria – co-founder of BJJ Fanatics, one of the most important super-heavyweights competitors of his generation, who can also boast numerous championship titles. Bernardo Faria is i.a. 6-time IBJJF World Champion. Importantly, he is not only an outstanding athlete but also a gifted teacher. Bernardo Faria is just such a likable guy who knows how to explain his teachings well.

And in this video, Bernardo perfectly shows all his virtues. The half guard DVDs shows a logical progression from how to begin a half guard sequence through how to advance your position. In the instructional, Faria not only explains how to do stuff but also why and when. He gives a lot of small details that are so important for perfecting the BJJ game. At key points, Bernardo also repeats critical sequences to reinforce their importance. Thanks to all of this, it is the perfect instructional for anybody of any age, rank, athletic level, and fitness level. These DVDs will be perfect as a starter if you are a beginner. However, they will also work great as a refreshment and way of polishing your skills.

The Half Guard Anthology by Lachlan Giles 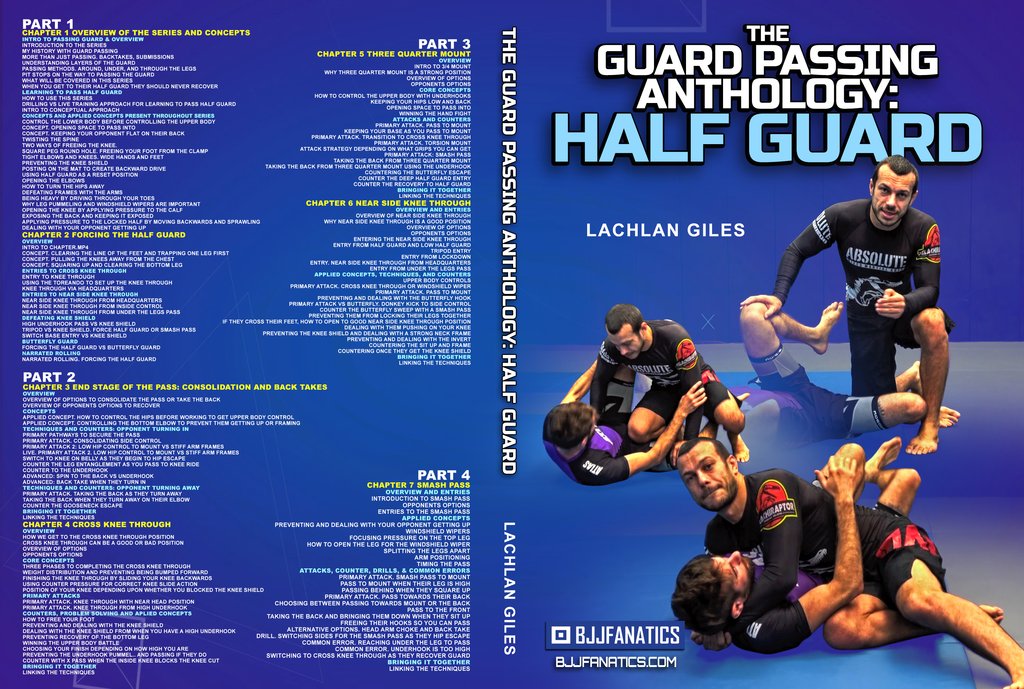 Lachlan Giles is without a doubt one of Australia’s best grapplers. If not even the best of his generation. For sure he is also with one of the best-known competitors in the world. The titles at numerous prestigious tournaments prove this and are confirmation of his reputation. Among many others, he is IBJJF World No-Gi Pan Pacific, and Eddie Bravo Invitational champion. Lachlan Giles is also revered for his work as a grappling coach, aiding athletes such as Craig Jones.

And if you want to make your half guard better, Lachlan Giles is here to change your entire game from this guard. He is just a fantastic teacher of BJJ and makes his teachings easy to understand. Moreover, his techniques are very unique and fantastic. And thanks to this material you can get to know all of his secrets. The video is very detailed and informative. It shows a lot of set-ups and positions with a view from a lot of angels. Lachlan Giles just presents effective techniques in an easy to learn and follow manner. 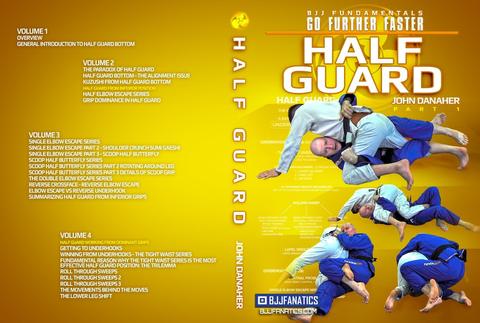 As in everything, also in BJJ, the basics are the most important. Without them, you cannot go on and develop. That’s why it’s worth starting with videos about them such as BJJ Fundamentals. And when it comes to the basics, there is no better person to learn from than such a good trainer as John Danaher. It’s just best to learn from the best. And John Danaher is simply excellent, and his teachings are very clear. He just does a phenomenal job explaining how even the most complex techniques work.

It is no different in the case of this material. The description of these DVDs really doesn’t lie, it’s really the most comprehensive instructional on the half guard ever created. The information in this video is so dense, that maybe you will even have to rewatch it multiple times to extract all the value from it. But don’t let this scare you. Danaher’s explanation makes it all easy to absorb and replicate in real life sparring. What he says and shows is easy to follow. Thanks to this everything is clear. He is very detail-oriented but also simplifies the concepts for anyone to understand. And this makes this series great for anyone, both beginners and higher belts.

The price of this material is relatively high. So, it may make some people hesitate if it’s worth the money. However, it is enough to see at least a piece of this instructional, and your mind changes. It is because thanks to this video you will completely transform your half guard game.