Winter is coming, it’s getting cooler, it’s time for warmer clothes. It’s time for the hoodie, BJJ hoodie. It’s not an ordinary piece of clothes, because it will not only keep you warm but also show the whole world you are a jiu jitsu practitioner. Below you can find some BJJ hoodies propositions that you can buy online. 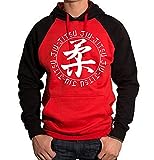 This Interstate Apparel Inc BJJ Hoodie is kinda a basic one. Although it is two-colored, the colors are subdued and match each other. Kanji sign for jiu jitsu surrounded by jiu jitsu lettering is a bit big, but thanks to that everyone even from very far will get that you train BJJ. This type of hoodie is perfect for everyday use and training. It is a pullover one made in 100% from cotton. 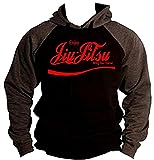 If you liked the first hoodie from Interstate Apparel Inc but thought the kanji sign was too big here is the solution for you! This one got the same color scheme and is also a pullover type. Both are good quality, this BJJ hoodie just got a smaller script than the previous one. However, despite the fact jiu jitsu lettering is smaller it got a nice slogan added to it.

We are still staying with the same brand. This time this BJJ hoodie is for you if you liked the smaller lettering of the previous one, but the color scheme of both was just too basic for you. The third hoodie from Interstate Apparel Inc is black and camo, which catches an eye a lot more than the above ones. However, unfortunately, it is not made all from cotton. It is 65% Cotton and 35% Polyester.

If you are a fan of simplicity and repeat over and over again “less is more” or/and fun of “stronger” colors this will be perfect BJJ hoodie for you. In contrast to previous examples, it got only one color. However, they are not so subdued. ThisWear BJJ hoodie comes in pink, blue, white, green and many other colors. The design of lettering is simple but nice, quote on the hoodie is also kinda cool.

More than an inscription 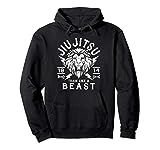 This is the perfect BJJ hoodie for everyone who wants to keep it simple, but not too simple. IRON CHIN JIU JITSU SHIRTS hoodie is one color, you can buy it in black, navy and dark heather. However, the design is the strongest point here. It got kinda classic jiu jitsu lettering but with very cool lion and slogan added to it.

This hoodie is a bit simpler than the previous one. The only triangle added to the lettering is making it more interesting. However, BEDLAM BESIEGED LTD. has one great advantage over previous examples. This is one of the few hoodies that got not only jiu jitsu lettering but full Brazilian Jiu Jitsu script. The same as above one it came in black, navy and dark heather. 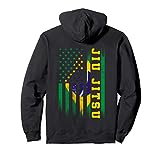 If you want to keep it simple, with only one color, etc. and you like kinda old school design this BJJ hoodie is perfect for you. You can buy it in black, navy, royal blue, and dark heather. As an above one, it also got a big plus for the whole Brazilian Jiu Jitsu lettering. In the previous example, the main shape was a triangle and here the circle plays the main role. 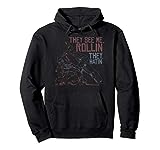 If you want to add a bit fun to your BJJ hoodie this one will be great for you. The design is simple, the hoodie is all black, lettering is in subdued colors. However, here what the script says is the clue. It is referring to the meme “They see me rollin’, they hatin”. This phrase with graphics of people rolling, instead of people using strange means of transport creates a new cool context. However, probably this will only be understood by people from the BJJ environment. This hoodie is not obviously telling others that you train jiu jitsu. BJJ or jiu jitsu script cannot be found anywhere on this hoodie. 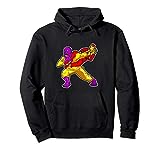 If the slogans are not for you, but you still want a funny BJJ hoodie and maybe at the same time you are a Marvel fan this will be perfect for you. This hoodie is a basic pullover type and you can buy it standard colors like black, grey or white. The graphics on it is what make it stand out. The image shows Iron Man pulling an armbararmbar to Thanos. Also, they are both in gis not in their normal suits which makes it even funnier. However, to understand this joke fully you need to know what is armbar, so probably people who don’t train BJJ will only see it as Iron Man and Thanos in a strange situation.

Each of these BJJ hoodies is cool of its kind. They are also mostly all at good prices and with great reviews. The choice is really wide. So it’s only up to you what you decide.