Leg locks have grown in popularity a lot in recent years and are still growing. Actually, they are more popular than ever. They are taught in many BJJ academies and are visible in various tournaments. At many of the most important grappling tournaments, you can see how because of the leg locks fights are won. No wonder that more and more people want to learn them and become better and better at them. And one of the best ways to learn is to watch high-quality instructional videos. That’s why below you will find the best leg locks DVDs and digital instructionals.

What are leg locks?

A leg lock is nothing other than a lock that is directed at the joints of the leg. It can be performed on ankles, knees, or hip joints. Their use is nothing new, they were not invented recently. It is also not a specific technique that occurs only in BJJ. Leg locks are used in many different combat sports and are said to be over 2,500 years old. Some even say that this technique was used at the original Olympics.

And when it comes to technical issues of leg lock performance, as with other joint locks, leglocks are more effective with full-body leverage. Some target large joints in the knee or hip and use leverage to counteract larger groups of muscles. While others directly attack the ligaments in the knee or the smaller ankle joint. Leg locks can involve control positions such as the inside leg triangle or leg knot to maintain control while applying the attack or transitioning between two attacks.

Leg locks you need to know

There are many types of leg locks. And of course, it’s better to know more than one. However, because it’s hard to learn all of them at the beginning, below are 3 leg locks, which you should know first of all. Not even to use them, but to be aware of their existence if someone tries them on you.

A straight ankle lock is not the only name for this leg lock. It is also often referred to as Achilles lock or straight foot lock. It is one of the first if not the first, leg locks learned in BJJ. This is because the technique is relatively simple to perform and can even be done by beginners. To perform a straight ankle lock you need to encircle (overhook) the forearm on ​​one of the opponent’s legs, preferably at the Achilles heel. Then, to end this submission, you must press your foot against the opponent’s chest (rib cage), move your hips forward while exerting an upward force using your forearm on your opponent’s Achilles heel.

Due to the great popularity and frequent use of heel hooks in grappling, it is just good to know them, even if only to defend against them. So, to perform a heel hook you must gain control of your opponent’s leg, his knee/hip joint(s) as well as the heel bone. After that, force is applied transversely, twisting the heel either medially or laterally. A frequent fulfillment of this submission is to gable grip your arms around your opponent’s knee of the controlled leg. In Gi BJJ it is a forbidden technique for lower belts because the movement of the heel hook forces torque on the ankle, which in turn transfers to the knee, causing possible injuries to many joints and ligaments.

Because heel hooks have greatly grown in popularity recently, many BJJ practitioners forgot about the kneebar. And it shouldn’t be like that, because it’s a great technique worth knowing. Moreover, like the straight ankle lock, the kneebar is relatively easy to perform and it is just very effective.

And if you want to understand how a kneebar works, you can think of it as an armbar with the use of legs instead of arms. Furthermore, like while performing the armbar, here you also need a tight squeeze of the limb. In the armbar, you would use the arm as the lever, and here you use the leg for that. Moreover, in the armbar, you apply force on the hand or wrist, and in the kneebar, it will be the Achilles tendon or the ball of the heel. Just remember to place your opponent’s knee on your belly. This is essential when hyperextending their leg, using the knee as the pivot point.

Toe hold is foot lock and one of those techniques that you learn later in Gi BJJ because it is only allowed to use from the brown belt. However, due to the general increase in the popularity of leg locks, it is worth getting to know it in advance. So, to perform toe hold you must keep your opponent’s ankle close to your chest. To do this, use a kimura-type grip to control the tip of the foot, usually by touching the little finger to the opponent’s toe. Thanks to this grip on your opponent’s foot you can twist their ankle, thereby hyperextending the ankle. The goal for the toe hold is to prevent the opponent from turning or kicking their leg away from you.

Now that you have a good idea of the most important and common leg lock submissions, in theory, it’s time to see how they look in practice. However, before you start testing them yourself, it’s best to watch a few videos of them beforehand. And that’s why below you will find the best leg locks DVDs and digital instructionals. 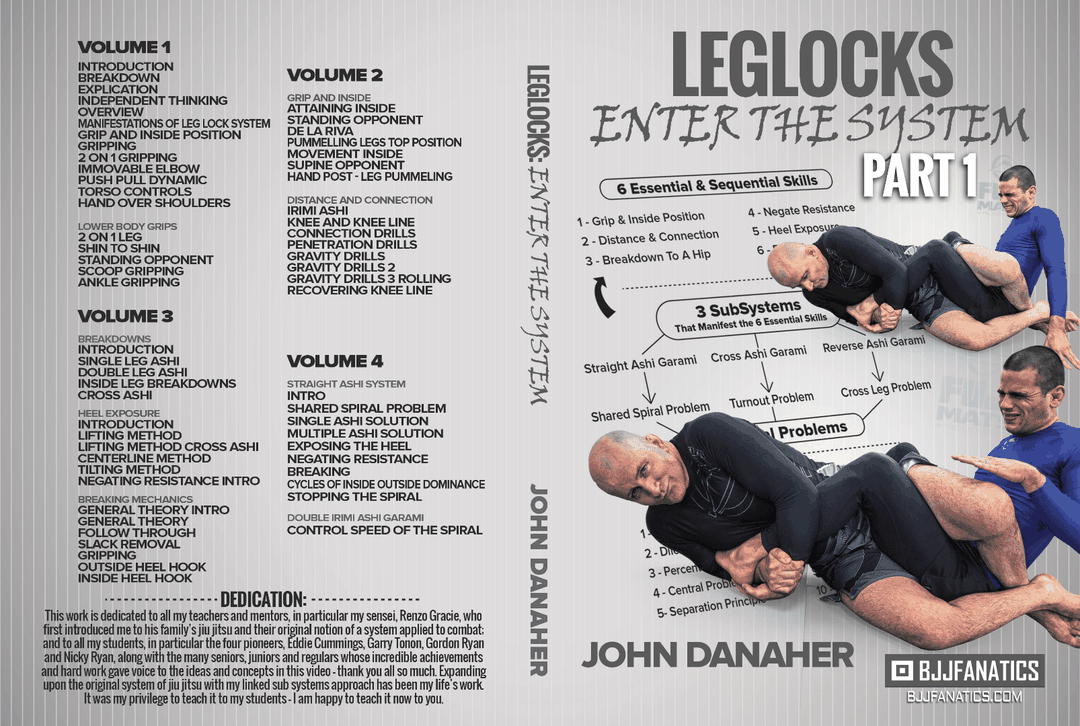 John Danaher is a bit of a living legend, widely regarded as one of the best, if not the best, coach of his generation. He is best known for training grapplers such as Gordon Ryan or Garry Tonon. And is mostly appreciated for his extraordinary knowledge and teaching skills. What he says and shows is just easy to follow. Thanks to this everything is clear. He is very detail-oriented but also simplifies the concepts for anyone to understand.

It is no different in this DVDs series. The level of detail in these instructionals is just amazing. Danaher goes into every detail of the leg lock game. Thanks to this you will learn fundamentals, entries, control, numerous submissions, potential problems, and solid solutions. Even though leg locks are not that easy thing to do, Danaher’s explanation makes it easy to absorb and replicate in real life sparring. The price of this material is relatively high. So, it may make some people hesitate if it’s worth the money. However, it is enough to see at least a piece of this instructional, and your mind changes. It is because thanks to this video you will completely transform your BJJ game.

Lachlan Giles is known as one of the top Aussie competitors of his generation. He earned his reputation through podium placements in many prestigious tournaments. Among others, he is IBJJF World No-Gi Pan Pacific, Boa Super 8, and Eddie Bravo Invitational champion. Moreover, Lachlan Giles is also respected for his work as a trainer for competitors such as Craig Jones.

And if you want to make your leg locks better, Lachlan Giles is here to change your entire BJJ game. In this DVDs series, you can see his submission system that shocked the world at The ADCC 2019. If you wonder if it’s worthy, you better know that he is just a fantastic teacher of BJJ and makes his teachings easy to understand. Moreover, his techniques are very unique and fantastic. And thanks to this material you can get to know all of his secrets. The video is very detailed and informative. Lachlan Giles just presents effective techniques in an easy to learn/follow manner.

Down Under Leg Attacks by Craig Jones 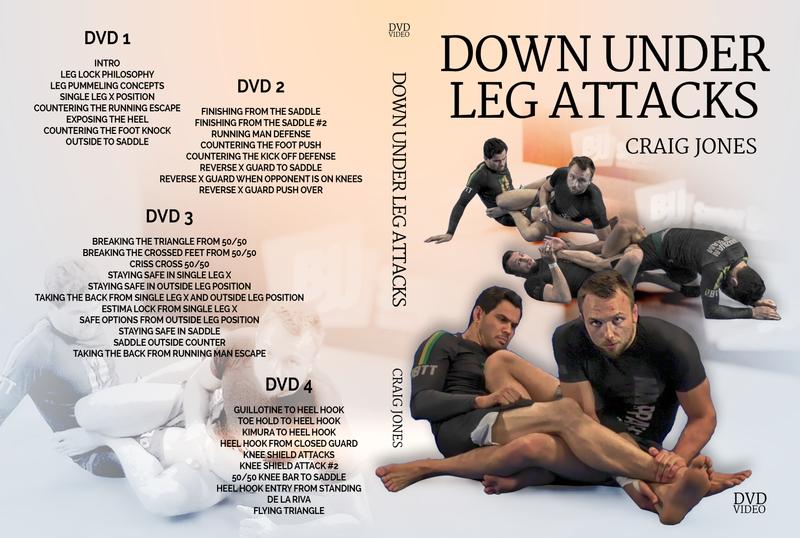 Craig Jones – Aussie, grappler, and BJJ black belt under Lachlan Giles, who got famous in 2017 at ADCC finals. In that year he submitted the tournament’s 88-kilogram #1 pick – Leandro Lo. Thanks to this material you can discover some of his secrets to success when attacking the lower body.

In this series, Craig incredibly breaks down absolutely each move. In the video, he goes through each step clearly explaining what needs to be done. What is also great, he covers things from different angles. Thanks to that, you can see all the little adjustments and important elements that make it all work. This instructional is just highly recommended for anyone getting into the leg lock game. And generally, anything you can learn from Jones will be a big plus to your BJJ game. Moreover, if the price is an important purchasing factor for you, this is one of the better-priced DVDs.

Once you know the theory and see the practice, you can start to do leg locks yourself. However, there is one more thing you should do before that. Before trying to heel hook your sparring partners, learn the rules for leg locks at your BJJ club. It’s best to just ask your trainer what his approach to this type of technique is.

It is also worth getting to know the general rules, such as those from IBJJF or ADCC, in order not to accidentally be disqualified at some tournament. For example, in IBJJF Gi competitions heel hooks are illegal at all belt levels. While straight foot locks and kneebars are allowed at different belt levels. Moreover, e.g. according to IBJJF rules the toe hold is only allowed for brown and higher belts while in the ADCC, they are fully allowed. There are more such examples, and they are not only related to leg locks. And that’s why it is always worth checking rules before each start in some tournament.