One of the best things about technology is that you are able to create opportunities or ways that would otherwise not be available due to any reason. The same case with training any combat sports, more specifically Krav Maga since there are not many gyms that would train in this regard or they are simply not available in many areas. What you can do to solve this problem is to get a Krav Maga DVD instructional that would guide you. However, it is very important that the DVD you follow be authentic and true to the rules or principles of Krav Maga; so, to prevent you from searching all around the web, we have mentioned some of them down below.

For those who want to learn and train in depth about the most practical and efficient self-defense systems in the world then the Ultimate Krav Maga DVD instructional is the thing for them. The series has earned itself multiple international awards, like the Telly Awards and the Aurora Gold Award. What you will find as content are the techniques needed to defend yourself against combat threats in real life, all accordance with the principles of Krav Maga. It will be taught by some of the best instructors from around the world, such as John Whitman, AmnonDarsa and some information of the founder ImiLichtenfeld as well. The DVD series also does a good job on how to take the learner from a beginner to intermediate level and eventually preparing him for more advanced stuff.

One of the best series for people who are just starting out and are interested in training in Krav Maga. The Basic Combatives DVD contains valuable lessons on various combat techniques utilized in the combat sport, it focuses on the basics first so the stuff is usually easy to learn and practice. It is also good at developing the roots by following the basic principles of KravMaga and getting rid of any useless movements or repetitive actions that are just for show. This product will help you in developing the basic combat techniques, like punches, kicks and their combination also how to defend yourself against real attackers. 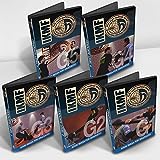 The Krav Maga Workout series focuses more on the conditioning for the body rather than the exact techniques; it is a great prelude to training in Krav Maga or if you are a beginner. The DVD series includes two intense workout sessions for a duration of 30 minutes. The workouts target the main muscle groups of your body in order to strengthen them and train their reflexes, mostly compound movements. More in the series give you 30 minutes of cardiovascular exercises to improve your breathing techniques, lung capacity and two flexibility routines that include stretching techniques to improve the range of motion for various punches and kicks. The instructor for this DVD will be Michael South who is a well-known black belt in Krav Maga.

The Mastering Krav Maga series is a good complement to the three-time award-winning book, Krav Maga Weapon Defenses (YMAA 2012) and the bestselling Mastering Krav Maga Vol. 1. The books were written by U.S. Chief Instructor David Kahn who is also a part of the Israeli Krav Maga Association; David Kahn is also the instructor in the DVD series. In this particular DVD called “Self Defense”, David Kahn will be teaching you all manners of essential techniques that are used to defend yourself against unarmed attacks. The attacks can be either from the yellow, orange or green belt levels according to the Israeli Krav Maga curriculum, meaning the scale of attacks can be from beginner level to advanced level. This is the most recent and comprehensive Krav Maga instructional to counter impact and edged weapons as many of these techniques have not been seen outside of Israel.

The Classes for Home Training in the Beginner Krav Maga series allows for you to focus on your training while at home. It is designed to make the time you spend working out at home more useful by targeting a variety of moves divided into four classes. The classes include drills for warm up, increasing skill gain, fitness elements, improving your techniques and a “skill game” that acts as a final test to determine what you have learned. The instructor in this DVD series is Michael South who is a black belt in Krav Maga, Hapkido black belt, is a certified personal trainer and the founder of the National Martial Arts, which is a martial arts based organization in Oklahoma having the sole purpose of making the world a better and safer place.